Neil Solomon said that when he started looking at salon suites as a franchise investment, he spoke with a couple of the big salon franchise operations.
One of them, Phenix Salon Suites, was obviously in the “salon suite business,” he said. “The other brand was in the real estate business.” 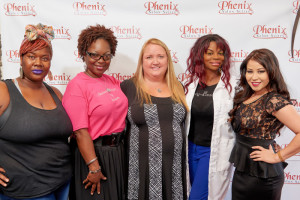 Some of the first stylists to begin the Phenix journey in the new Jacksonville, FL, location.

Solomon went with Phenix. His company’s first Phenix location, following several successful franchise ventures in the restaurant industry, just opened in Jacksonville, FL.
“I saw that these (salon suites) were popping up, and I became interested in the concept,” Solomon said. He eventually met Jason Rivera, who founded Phenix Salon Suites with wife, Gina Rivera, President and Beauty Expert at Phenix Salon Suites.
“It was the people,” who convinced him that Phenix was the best choice. “I had a much better feeling about the leadership in this company.” Jason and other members of the corporate team model that focused on the needs of the stylists and other salon professionals.
“If it’s only about real estate, then I didn’t need a franchised brand behind me,” said Solomon.
With Phenix, though, “there was a knowledge of the customers,” said Solomon. “And there seemed to be a much friendlier way of doing business.”
Choice made. Solomon expects to open several more Phenix locations in the Northeast Florida region.

Mane Addicts | 20 Experts on What Hair Products to Pack When You Are Headed out on a Beach Vacation featuring Gina Rivera
Prose.com | Gina Rivera on How to Reap All The Rewards Silk And Satin Have To Offer Your Hair
ESSENCE| See Beauty Expert Gina Rivera In “5 Expert Tips For Making Thin Hair Look Thick”
@bythisbeauty | Instagram Influencer Features the BioGen Complex by Gina
The List | Haircuts you’ll be asking for in spring 2020 featuring Gina Rivera

Could not authenticate you.