Sandra and Martin Palmer spent their honeymoon on a sailboat beach-hopping through the British Virgin Islands. More recently they put their home up for rent and spent four years in an RV crisscrossing North America in search of adventure.
“We’ve calmed down a little bit,” said Sandra. “Now we just own a salon.”
Their Phenix Salon franchise in San Antonio, TX, has been anything but boring and not without potholes and detours. After two years, though, the self-described DIYers have it very nearly full with a waiting list and a particularly compatible mix of stylists and other salon professionals licensed at the location. 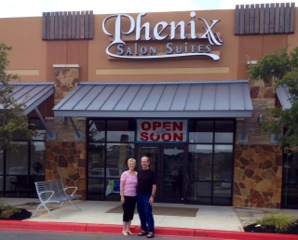 Sandra and Martin Palmer on their latest adventure, a Phenix Salon Suites in San Antonio, TX.

“We traveled our way through it,” Sandra said. That has included bouts with the wifi, which now runs beautifully, and problems with the first water feature. The new ones are “far superior,” said Martin Palmer, who spent time cleaning the fountain and washing windows among other tasks to save money in the first year. The Palmers also found that:
•  By adding unsweetened lemonade powder to the fountain, the citric acid will get rid of pinkish algae. They also add a lavender spa scent that’s “not too sweet, not too tart” to give the entry a wonderfully inviting aroma.
•  They devised a brilliantly simple system of magnets with suite numbers to help stylists keep track of their laundry in the onsite washer and dryer.
•  They subscribed to Pandora’s commercial service for reliable, popular background music.
•  It wasn’t long after opening that they realized how important it was to have a receptionist who keeps the place very clean. Now they have Erin. “The girl I’ve got now, she loves to clean … I’m really blessed to have her,” said Sandra.
Erin is at the salon five days week, answers the phone 10 hours a day and is much liked by the resident stylists.  A take-charge person, “she sees something that needs to be done, she does it.”
“We’re always looking for ways to make it better,” Sandra said. The San Antonio franchise officially opened the doors August 2012. “Well, it’s kind of like my baby,” she said. “I just took care of it, all the cleaning and showing the suites.” Now she’s there three days a week minimum.
A dancer and former elementary school teacher, Sandra said, “I don’t feel like it’s work. I have a good time down there.” Like her performances or a painting, “my name goes on it. That’s the way I treat my salon.”

Mane Addicts | 20 Experts on What Hair Products to Pack When You Are Headed out on a Beach Vacation featuring Gina Rivera
Prose.com | Gina Rivera on How to Reap All The Rewards Silk And Satin Have To Offer Your Hair
ESSENCE| See Beauty Expert Gina Rivera In “5 Expert Tips For Making Thin Hair Look Thick”
@bythisbeauty | Instagram Influencer Features the BioGen Complex by Gina
The List | Haircuts you’ll be asking for in spring 2020 featuring Gina Rivera

Could not authenticate you.